The Most Powerful ½” Air Impact Gun 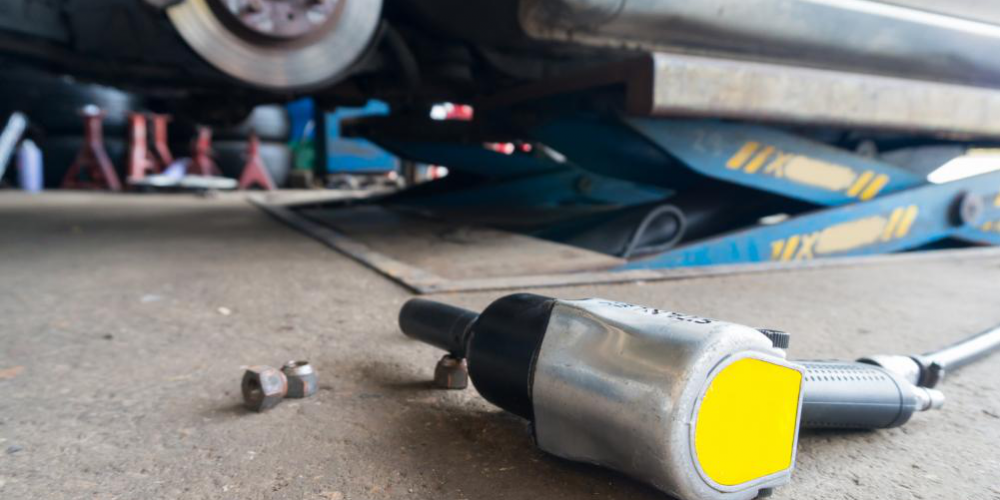 An air impact gun/wrench is a powerful tool. These guns are used to deliver a high-torque output with very minimal exertion. My choice is the

They usually operate by storing energy in a rotating mass. The energy is then delivered to a small area of output. This is done by storing air or through hydraulic pumps or electrical energy.

However, there are varying power levels of this kind of energy. There are wrenches or air guns that can deliver nearly 1300 ft-lb of force, or even higher. These tools are used for the most robust and heavy-duty machines out there. Here is a rundown of the most powerful ½-inch air impact guns you can buy right now.

The AIRCAT 1150 is built for power and speed. If you need to make quick work of a rusty hinge or a tire with rusty bolts, this is your air gun.

It works by loosening a lot of bolts quickly by providing very high torque very quickly.

The AIRCAT provides 1295 ft-lbs of torque, which is enough to loosen the toughest and most rusted bolts out there.

The AIRCAT also has the capacity to deliver 1400 blows per minute. This means that it delivers consistent pressure and doesn’t let go. That makes the job easier. It’s also not the loudest air impact gun out there. It produces 86 decibels, barely louder than the window air conditioner or normal traffic.

However, the model is hard to work with. Due to the sheer power it delivers, the model vibrates quite aggressively, and a steady hand is needed in order to operate it. It’s probably the most powerful ½ inch air impact gun on the market right now.

This is technically more powerful than the AIRCAT 1150. However, it loses out on the impacts per minute. The most powerful air impact wrench doesn’t just have to deliver on its promise of force, but consistency. While the AIRCAT 1150 has 1400 blows per minute, the Ingersoll Rand has 1200. That doesn’t make much of a difference when you go for short intervals, but it builds up.

Due to the lower impacts per minute though, this air impact gun is much easier to handle. Its 1300 ft-lb of torque doesn’t betray the operator by delivering fewer blows per minute. It allows for more control, and thus, for a more precise job to be done. For those of you that require a little bit more control than power, this is the best option.

There are a few features common to the most powerful ½ inch air impact guns. They mostly boil down to the power and the mechanism through which the force is delivered. However, other factors like the size and the design are also crucial.

The most important feature of an air impact gun or wrench is the torque. The larger the torque, the easier it is to get the job done. It especially helps if you’re dealing with many rusted or stuck bolts. You can never go wrong with an air impact gun that has a lot of torque.

Product descriptions don’t always tell you how much torque is needed to get the job done. However, a general rule is that an air impact gun which has a torque greater than 1000 ft-lbs will do a good job. This wrench will be adept at removing rusted and stuck bolts.

If the torque’s value is below that, then you can’t guarantee that it will make short work of rusty bolts. However, as mentioned before, there are other factors that come in to play.

Depending on the model of the air gun you’re using and the compressor in it, you may be able to loosen those rusty bolts easily. There is a chance that you’ll be able to make up the shortfall with the design or the mechanism involved as well.

However, for the easier and less stressful work, you’ll get by with torque around 500 ft-lb. Air impact guns with that value of torque won’t have as much of a punch,  but they’ll help you with more general tasks. It’s a bad idea to change tires with them though. In that case, you’ll probably be better off using a hand wrench.

The size of the impact wrench is also a major factor when it comes to power. Large models do generally have a greater impact force. However, they don’t always deliver on their size. Occasionally, you can find models that are much smaller in size but pack a greater punch. However, that is an exception. Hence, if you want power, go for a larger wrench.

Smaller air guns are better for home use and don’t belong in the workshop. If you’re a professional, going for a smaller wrench need only be for a special project. For the general tough work, you’ll need a large air gun.

Smaller air guns are great for smaller projects that put less strain on your wrists. This makes them much easier to maneuver with. They are also much easier to get into smaller and tighter spaces.

Then comes the issue of balance. If you’re attaching a heavy air hose to the air gun, then you need it to be as balanced as possible. In that case, a smaller air gun would be better. Otherwise, the larger air gun makes the entire process unwieldy and more complicated.

The third and final major factor that affects power in an air impact gun is the adjustment. There are two ways in which the torque can be adjusted. Lower end models tend to use adjustable dials for torque adjustment.

Most of these models feature a dial that rests behind the unit. They have three options (low, medium, high). Others feature a deal that is below or above the trigger. This makes them much easier to operate by hand.

As you go up the price ladder, models increase torque when you press down on the trigger. This is a mechanism that provides for much less control but allows for greater one-handed use. More experienced hardware enthusiasts, however, may prefer this. Since steady hands and a more skilled operator can do wonders with this, it’s a tool of choice for them.

A common complaint with some air impact gun models is that they don’t usually increase torque as smoothly as others. This may be because of an exponential increase programmed into the air impact gun. Some owners have also reported that some models deliver the same torque, no matter how much you pull down on the trigger.

If you follow this guide then you’ll get the best air impact gun or wrench for you. They’re excellent tools to make short work of rusted bolts. However, they’re also great tools to work on your own personal project.